Difference between revisions of "Lacrymosa"

Recorded in a chapel[1] at Seattle, Washington,[2] the song was originally written for the movie The Chronicles of Narnia: The Lion, the Witch & the Wardrobe, but was scrapped by the director. "I thought it would be awesome for the opening scene, but they wanted something original," Amy stated.[3] However, the producers of the movie later stated that neither Lee nor Evanescence were approached to compose music for Narnia.[4]

It features elements of W.A. Mozart's Lacrimosa from his Requiem in D Minor. The name of the song is a corruption of the Latin term lacrimosa, which means "tearful".[5] This word is also the scientific name for a species of moth, Catocala Lacrymosa, also known as the 'Tearful Underwing'. This species of moth features on the cover of The Open Door's booklet and on the cover for the "Sweet Sacrifice" radio promo CD. Amy stated that she wanted to make Mozart's Requiem "metal" since she listened to it as a teenager.

A 22-cord orchestra led by David Campbell (with whom Evanescence had already worked for their performance at the Billboard Awards 2004) starts off the song in order to introduce a choir, which serves as back up for Amy's vocals.

Out on your own
Cold and alone again
Can this be what you really wanted, baby?

I can't change who I am
Not this time, I wont lie to keep you near me
And in this short life
There's no time to waste on giving up
My love wasn't enough

[Lacrimosa]
And you can blame it on me
[Dies illa]
Just set your guilt free, honey
[Lacrimosa]
I don't want to hold you back now love
[Dona eis requiem] 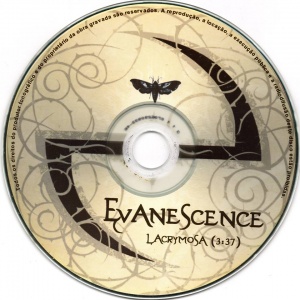 The CD has a very elaborate artwork, different from the usual CD-R promos from The Open Door album. It is housed in a slimline case. It is believed that around 5 to 10 copies were ever made.

There were 3 to 4 promos of this VERY limited Brazilian edition surfacing the web since 2007. There are a few recognisable typical features of some Brazilian issues such as the writings on the rim and well as the Evanescence logo written in bold (similar to the "Promo Only Videos" DVD).