This article is about the album. For the song, see Origin (song).

Origin was released on November 4, 2000, in Little Rock, Arkansas. Many different versions of Origin exist, but there’s only one true track listing and IFPI codes. It was produced in a plant in Richmond and only 2500 copies were originally made. Bigwig Enterprises stopped selling Origin in early February 2003 (a day or two before the Daredevil Soundtrack album was released) and removed it from their catalogue.[1][2] Amy Lee does not consider this an album, but rather a collection of demos that they "dressed up" to send to different major labels. The album contains early versions of songs found on Fallen: "My Immortal", "Imaginary", "Whisper".

Contrary to popular belief, the album was not intended as a "shopping" album for record labels (i.e. talent scouting). Evanescence shopped to labels some Origin songs remade with the help from the band Dust for Life[3], after the producer Pete Matthews had decided to invest his time in promoting Evanescence project[4].

The original release contained a hidden track, which is located before the first track. In order to hear it, you have to rewind (while hearing what you are rewinding) the first song and reach -0:24 approximately (yes, minus). It is an outtake of the end of the bridge of Anywhere, featuring Amy Lee and David Hodges singing and a quote from the movie My Boyfriend's Back:

The front cover was created by Rocky Gray.

The end of the album was originally supposed to include the song "Listen to the Rain" between the songs "Eternal" and "Demise". Origin differs from other Evanescence records in that it features more electronic instrumentation and the tracks are more closely linked to one another.

Amy Lee talked about the band's older songs in an interview:

"Whisper" was released as the lead single from Origin.[6]

The following images are original concept art produced by MonstorGraphix and Adrian James. The disc is a scan, but only because original vector-based artwork doesn't begin to resemble the actual disc. These are as accurate as images of this disc can get, and are gently watermarked to discourage bootlegging.

The insert is a tri-folded demi gloss, light-medium weight paper with one side of color images and the reverse side of grayscale. The tray insert is single-sided. The piece of plastic that the disc sits in is opaque.

These are screenprints of the pages related to Origin and to Evanescence on bigwigenterprises.com (all the images have been found through the WayBack Machine): 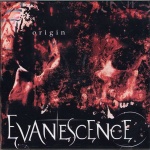 In 2003, a "re-release" of Origin came out supposedly under the label 'Epic', although it was, in fact, a fake CD. It contained most of the tracks from the real Origin; however, different versions were used with some tracks, . In the case of "Whisper" and "My Immortal", the Fallen versions were used. The audio portion of the CD was very poorly produced, and in most cases, the songs were either corrupted or of low quality (as if downloaded as an MP3 and then burned on the CD). This bootleg has very elaborate and professional looking artwork, with a silk screened, factory pressed CD and a fold out booklet with a small biography (which mostly rambles on about the 'Christian band' controversy). The CD contained 'Bonus Tracks' such as "Missing" (which is very corrupted and of extremely low quality), the Nirvana cover 'Heart-Shaped Box', and a [rather bad] trance remix of "Bring Me To Life".The CD itself has a red silkscreen with black bird design with the word "sorry" on it. The jewel case has a gothic red design with a speckled face on the back along with the track listing. The inside tray artwork has an image of the band (the one from the booklet in Fallen). The cover has a skull design that is similar to the actual album released by the band. The most noticeable difference is the Evanescence Logo, which is pointy and unlike any design officially released by the band. On the back artwork the fine print/credits are actually copied from the back of Fallen.

This fake re-release was the first one of many more to come, produced in countries like Russia, Hong Kong and even the USA. 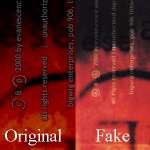 Recently, bootlegs are now becoming harder and harder to distinguish from the real thing. The authentic artwork, distinctive CD numbers and tracklisting—right down to the hidden outtake track — are all present and in (apparently) extremely good quality. There is some speculation that someone from Bigwig Enterprises is producing these items because of their immaculate authenticity, but this cannot be verified. Either way, these bootlegs are saturating the online auction market and making it nearly impossible to acquire a real copy of the album. They usually sell for around $40-$60 on eBay.

Rumours of pre-releases, promotional releases and UK releases have once been spread by they were proven to be misleading. 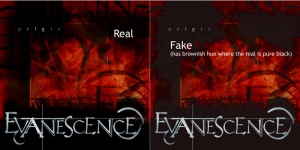 Having a reasonably limited first pressing, Origin is highly sought-after by collectors and fans of the band. However, the longer is has been since its release date, the harder it has become to come across an authentic CD from the true first pressing.

Apart from the same old pieces of advice anyone could receive (doubt groundbreaking bargains and sellers without reputation or decent and proper feedback), when faced with an online opportunity to buy an Origin CD, the buyer should always keep an eye to some specifics which might help determine the authenticity of the item:

Also, beware of "signed items". Autographs don't legitimate anything, regardless of having or not "Certificates of Authenticity" or pictures showing when they were taken. The band is probably used to signing Origin copies when they go on tour offered by fans, regardless of being true or bootleg CDs.

You can download a Perfect Rip of the album here: