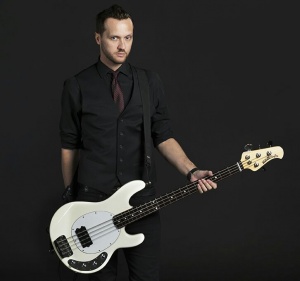 Tim McCord (born June 28, 1979, in Sacramento, California) is the current bass player for Evanescence. He was announced as the band's new bass player after Will Boyd left in June 2006.[1] Before joining Evanescence, Tim was mostly known for playing guitar for The Revolution Smile from 2000 to 2004. Tim's older brother, Matthew McCord, is active in the Sacramento indie music scene.

In 2008, Tim recorded bass on Amy Lee's cover song Sally's Song and also performed it live with her on The Tonight Show with Jay Leno and El Capitan Theatre in October 2008.[2]

He co-wrote Your Love with Amy, which was performed at Legends & Lyrics in early 2009 and remains unreleased to date.[3] Later that year, he started writing Evanescence's self-titled third album at Amy's home in New York.[4] On April 5, 2010, he joined Amy in the studio after she'd been working on the album for two months.[5] On April 20, recordings were suspended and the initial sessions were scrapped at Wind-up's behest.[6][7] The productions started again in 2011 and ended in July that year, and the album was finally released later that year.[8]

In 2017 he recorded synths and guitar on Synthesis.[9]

He has songwriting credits on nine songs from The Bitter Truth: Broken Pieces Shine, The Game is Over, Feeding the Dark, Wasted on You, Better Without You, Use My Voice, Take Cover, Part of Me, and Blind Belief.