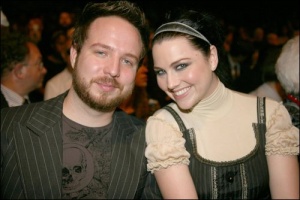 Josh Hartzler is Amy Lee's husband. He was born on November 4, 1977 and works as a therapist. He is also a photographer. He took Amy's promotional pictures for the 2009 shows[1][2] and the album cover for Evanescence's fifth album, The Bitter Truth.[3]

He was the main inspiration for Evanescence songs Bring Me to Life and Good Enough.

Josh and Amy were engaged on January 8, 2007. The next day, Amy announced their engagement publicly during a live broadcast on Canadian show, MuchMusic.[4][5] They got married on May 6, 2007 at Amy's family home in Little Rock, Arkansas, and now they live in New York.[6]

Josh is credited for co-writing the lyrics for David Hodges' solo career on the album Musical Demonstrations Pt.1. The related songs are Crowd Of Me (with Hodges and Stuart Upchurch), Fly, and Thursday (these two last only with Hodges)[7]. He has also co-written Daughtry's last single off his Daughtry album, What About Now, along with Ben Moody and David Hodges.

Josh made a brief appearance on the Making of Fallen video.

On January 18, 2014, Amy announced that she and Josh are expecting their first child together.[9] Jack Lion Hartzler was born on July 24, 2014, with the announcement of his arrival four days later.[10]

In 2016, he was credited for co-writing the songs The End of the Book and If You're a Star on Amy's children's album, Dream Too Much.[11]