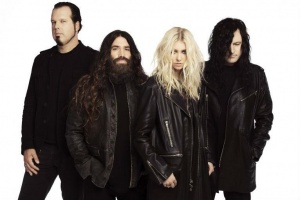 The Pretty Reckless is an American rock band from New York City, formed in 2009. The band released their debut studio album, Light Me Up, in August 2010. The album spawned three moderately successful singles, most notably Make Me Wanna Die. In March 2014, the band released their second studio album, Going to Hell, which included the singles Heaven Knows and Messed Up World which topped the US and UK rock charts. The band's third studio album, Who You Selling For, was released on October 21, 2016 by Razor & Tie. The album spawned the single Take Me Down, which earned the band their fourth number one on the US rock chart.

They toured with Evanescence and Rival Sons in 2011 from October 10th to November 21st. In an interview with MTV, Taylor Momsen recalls that Evanescence was "one of the first shows [she] ever went to" and that opening for them is "really exciting".[1]

In an interview with Front Row Live in 2013, Taylor was asked if there's anything that they've picked up from touring with other bands that they are using to their advantage, and Taylor responded with how professional Evanescence's crew were:

In a 2017 interview with Billboard, Taylor said that Evanescence was her first concert when she was about ten years old and considers Amy an innovator:

On August 14, 2020, Evanescence's single Use My Voice was released that features guest vocals of Taylor Momsen and several other female vocalists.[4]