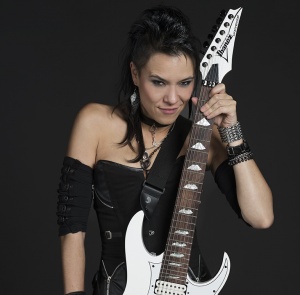 Jen Majura, whose birth name is Jennifer Majura Indrasen, (born 16 June 1983) is a German guitarist, bassist and singer. Having played professionally since 2000, she is currently the rhythm guitarist for Evanescence. It was announced on August 7, 2015 that she joined the band, replacing long-term member, Terry Balsamo.[1]

Jen explained that she didn't have to audition to join the band, and that a mutual musician friend suggested her to Amy Lee after she was on the lookout for a new guitarist.[2]

Jen debuted with Evanescence at the Marathon Music Works in Nashville, Tennessee on November 13, 2015. She sang and continues to sing back-up vocals during the live sets.

The first Evanescence song Jen has songwriting credits for is Imperfection, the lead single from Synthesis. For the album, she learned a new instrument, the theremin.[4]

In May 2017, Jen announced that she will be recording her second solo album, InZENity, in August and that it's planned to be released in November. The crowd-funding campaign went live on July 26th, with special packages including her first solo album, your name in the album booklet, a guitar lesson over Skype, stage clothes and much more. The total goal was $8,000.00, and it was reached in less than 24 hours. The album was officially released on November 24th and is available on CD and digital. 7 On January 31, 2018, Jen announced that she designed her first jewelry collection with Rockys. It includes guitar pendants and chains with different combinations. You can view the collection here.

After Evanescence's Synthesis Live show in Jacksonville, Florida on August 20, 2018, Jen met Terry Balsamo for the first time. She posted this to Instagram:

In early 2020, she recorded with the band the first batch of songs for Evanescence's fifth album, The Bitter Truth. Due to the coronavirus pandemic, she had to record her parts remotely as she lives in Germany and couldn't join the band in July 2020 to resume writing and recording.