Difference between revisions of "Lindsey Stirling" 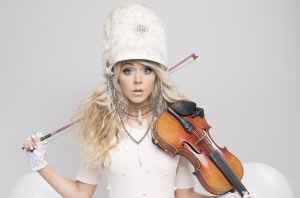 Lindsey Stirling (born September 21, 1986) is an American violinist, dancer, performance artist, and composer. In 2010, at the age of 23, Stirling was a quarter-finalist on season five of America's Got Talent, where she was described as a "hip hop violinist". She impressed the judges on America's Got Talent, not only by mixing hip-hop, pop, and classical music on the violin, but by incorporating dancing with playing the violin, which she also does on her tours and official music videos.

On September 15, 2017, Revolver published an article that said Lindsey makes a guest apperance on the song, Hi-Lo. Amy Lee confirmed it was true in an Evanescence Q&A on Facebook, making it the second Evanescence song ever to feature an external artist (the first being Paul McCoy on Bring Me To Life).

Episode four of Inside Synthesis features Lindsey in the studio recording Hi-Lo. Amy speaks about how she thought of Lindsey after talks of a guest featuring on the song took place;

Lindsey talks about her admiration for Amy Lee as an artist in the episode;

Amy and Lindsey finally met each other when Amy attended Lindsey's Warmer in the Winter show in Portland, Oregon on December 19, 2017.[2]

On March 5, 2018, Lindsey uploaded a short video to all of her social media accounts labelled "Dreams coming true, Summer 2018", and the video featured Lindsey jokingly talking about being a "casual" Evanescence fan, with the camera panning out to band merch covering the walls as well as Lindsey wearing an Evanescence t-shirt and gloves. Her phone then rings with Bring Me to Life as her ringtone with text from Amy Lee saying "What are you doing this summer?", the screen then cuts to the Evanescence logo with the words "Summer 2018".[3] The next day Evanescence confirmed that they will indeed be touring with Lindsey in the Summer. The tour dates were posted for the United States and Canada which will take place from July 6th until September 8th.[4]

Lindsey and Amy held a live Facebook Q&A on April 30, 2018 where they answered fan's questions about their upcoming tour.[5]

In 2019, Amy Lee sang on the song Loves Goes On and On from Lindsey's album Artemis. Then in 2020, Amy and Lindsey performed a special rendition of Evanescence's new single, Wasted on You.