Apple Garamond (bitstream inc.)
-Not exactly the font but freakishly close. Used for the liner notes and back tracklisting. Also used on the Live CD/DVD set Anywhere But Home. A slightly stretched version was used for the Imaginary Radio Single.

The Last Font I'm Wasting On You (Mirror) (by Gyakusetsu)
-Used for the track listings on the back and lyrics pages of the album. File also contains an accurate 'e' logo and "the Open door" cover logo.
Monotype Corsiva (The Monotype Corporation)
-Used on international releases of The Open Door when a lowercase typeface was preferable. If you use the capital letters from The Last Font I'm Wasting On You and the lowercase letters from Monotype Corsiva, you get the desired effect. See the example of the Call Me When You're Sober logo:

Lucida Fax Regular (Bigelow & Holmes inc.)
-Used in the liner notes and acknowledgements sections of the album and any place else where there is text (if it isn't The Last Font I'm Wasting On You, it's Lucida Fax). see the example:
Lucida Fax

Curly Art Nouveau (House of Lime)
-Used in the promotion of The Open Door. Contains the curly logo decorations and other fancy curvy characters including the one used in the EvThreads.com logo.

The old Evanescence logo
-There is no font of the older Ev logo, however on Evanescence's old pre-Fallen website, there was a photoshop vector hosted that had the logo as seen on the Bring Me To Life Daredevil Radio Promo .

-The logo we all know and love. Used on 'Fallen,' on all the promotional singles, and on promotional merchandise. Can be easily derived from the 'Evanescent' font by typing the characters "EVan+escéncç" (I know its weird, but you've gotta trust me that it works).

The Anywhere But Home and The Open Door era logo
-Has an altered 'A' character with an extended right leg. Used only on the Anywhere But Home cover, but when the The Open Door era came around, it began getting used everywhere from the album cover to t-shirts and stickers. Can easily be derived from the 'Evanescent' (as tweaked by Gyakusetsu) font by typing the characters "EVön+escéncç" (I know its weird, but you've gotta trust me that it works).

The simplest of design. This logo is the lowercase letter 'e' and, when turned 180o, looks exacly the same. During the The Open Door era, the logo went through a bit of a makeover and is now skinnier. The 'Evanescent' font has the original logo (character '§'), and 'The Last Font I'm Wasting On You' has the newer, slimmer logo (character '©')

Appears on the front cover of Fallen. This logo is very difficult to produce using the Evanescent (By Aeryan) font, so I have included it in the tweaked version. To get the logo, simply type out the character '±' (note: you must have the tweaked version installed to get this character)

My Immortal Logo thanks to Gyakusetsu for drawing this file.
This design appeared during the era when My Immortal was released as a single. You can find it on all International Single Releases (excluding those from the UK) and even appeared on a clothing item sold in the official merchandise store (now long sold out). 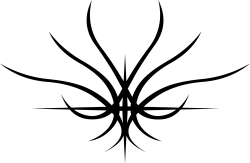 Appears on the front of The Open Door and on much of the merchandise sold surrounding this era. The logo is included in 'The Last Font I'm Wasting On You' and you can get it by typing out the character '®'. Contrary to popular belief, the logo cannot be derived by typing out "the open door" using the Anywhere But Home font. The two are indeed somewhat simmilar, though not at all a suitable match. 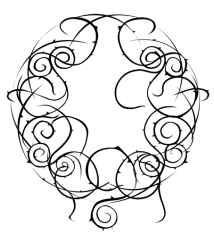 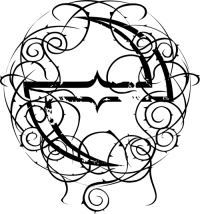 The logo as can be seen on EvFanClub.com. The fonts used are the standard Evanescent font and a variation on Kozuka Gothic Standard (L) (which is bundled with Adobe® Creative Suite 2 and not freeware) that has been skewed so that the characters are approximately 80% normal width.