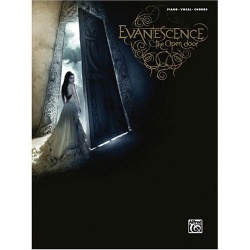 The cover of Piano-Vocal-Chords edition.

The official songbook for The Open Door. Published by Alfred Publishing, it has been released in two editions, Guitar Tab edition and Piano-Vocal-Chords edition.

The first four and the last two pages feature images also included in the album's booklet.

It contains all 14 songs from The Open Door. The order of the songs is the same with the album's order.