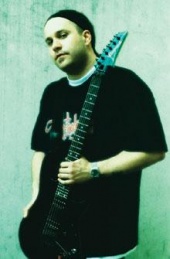 Terry Belsamo (born October 9, 1973, in Jacksonville, Florida) can most prominantly be seen and heard in the band's Anywhere But Home (2004) Live CD/DVD and now on the band's new album The Open Door (2006). His style and sound have most definately made an impact on the band, and with astounding results. He has become Amy Lee's main collaborator for Evanescence and co-wrote most of Evanescence's new album including the album's first single, Call Me When You're Sober.

Terry made his start in the music world as an early member of the now infamous Limp Bizkit. He left a few years before the recording of Bizkit's now classic album 3 Dollar Bill Y'All (1997), being replaced by Wes Borland. In late 1999, Terry joined up with fellow Jacksonville rockers; Scooter Ward, Sam McCandless, Jeremy Marshall and Kelly Hayes. Otherwise known as the monsters of Alternative Metal, Cold.

In November 2005, Terry suffered a stroke from a torn neck artery which landed him in the hospital for an unspecified amount of time. Indeed, Headbanging was the cause of the stroke. "They had to do an MRI. When they did the MRI, the doctor came back in the room and he was like, 'Have you ever had any neck injuries like from a car accident or anything?' And I was like, 'No.' Then we were like, 'Other than banging his head all day and every night for an hour and a half.' I’ve always had weird thing in my neck doing that, but I never would have thought it would have given me a stroke." (1) Terry has partially recovered, he says "a good 50% from it," and is touring with the band.

"I use Ibanez guitars. In the studio, I kind of use a similar setup to what I used on the last Cold record I did, which is mix up the amps and combine the sound together. It’s a Diezel and a Mesa Boogie Triple Rectifier and mixed that for one side. Then I took a Bogner and a Mesa Boogie Triple Rectifier on the other side. I combined it and made one big wall of metal.