Described as a song about "a post-relationship catharsis that head-dives from an otherworldly intro into a hard-driving thrash of hard rock guitars and soaring rock vocals" by Evanescence.com. In an interview with EvanescenceVille, Amy was asked: "Which was the song on The Open Door that gave more trouble to you? Which was the song that needed more adjustments to obtain 'the final cut'?"

Additionally, Amy made known to the fans through EvThreads that John LeCompt didn't take part in the production of the song and he should not be given credit:

Amy has said that she is the "sweet sacrifice" in the song. She said the song is about the time when Ben was still in the band, and that she hopes a similar situation won't happen again.[4] Officially chosen as the third single from The Open Door after requests from the band and fan reactions prompted the label to rethink ideas of releasing "All That I'm Living For" as the single.[5] The song was nominated for the Best Hard Rock Performance Grammy Award of 2008.[6]

It's true, we're all a little insane
But it's so clear
Now that I'm unchained

One day I'm gonna forget your name
And one sweet day,
You're gonna drown in my lost pain

You poor sweet innocent thing
Dry your eyes and testify
And oh, you love to hate me
Don't you, honey?
I'm your sacrifice

Do you wonder [Our burning ashes]
Why you hate? [Blacken the day]
Are you still so weak [A world of nothingness]
To survive your mistakes? [Blow me away] 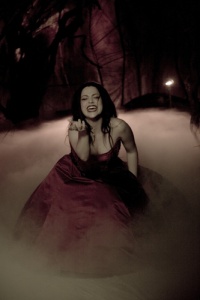 The video was filmed on March 9 and March 10, 2007 and was directed by Paul Brown. For each day of production, one lucky EvClub member was given the chance to visit the set and take pictures while they watched the video being made (see Contest Details). CNN broadcast a segment featuring some behind-the-scenes footage of the video on March 16, 2007.

The video was officially released at launch.yahoo.com on April 5th, however iTunes North America had accidentally made it briefly available for purchase the day before.

The Sweet Sacrifice single was commercially released in Germany on May 25, 2007.

Tracks released with the single include: