Difference between revisions of "MSR Studios" 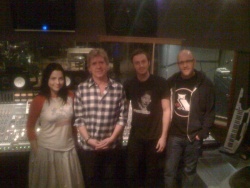 Amy Lee, Steve Lillywhite, Chad Copelin and Will "Science" Hunt in the studio

MSR Studios was the largest full-service recording facility in New York City. MSR Studios was located just outside Times Square at 168 West 48th street, between 6th and 7th avenues. Due to the construction of a hotel, MSR ceased operations at its Midtown location in June 2016. Noise levels from construction made recording difficult. MSR reopened their doors to the public in Montclair, New Jersey in 2017.[1]

The initial sessions for Evanescence took place in Studio A from February 22, 2010 to April that same year with producer Steve Lillywhite, but were scrapped by the label.[2][3][4] This scrapped album is referred to as "broken record."[5] It is also where Amy recorded the piano/vocal version of Even In Death with Dave Eggar for the Ultimate Collection boxset in 2016.[6]