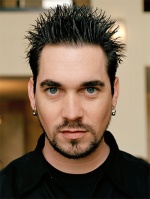 John LeCompt (born March 10, 1973 in Little Rock, Arkansas as John Charles LeCompt) was co-guitarist in Evanescence from 2002 to 2007 when, after signing with Wind-up Records, Amy, Ben and David turned to some old friends (John, Rocky and Will included) from Little Rock to help with the writing process for Fallen and the live tour production. John's aid with Evanescence traces back to 2000, where he is mentioned in the booklet for Origin, credited/thanked as "the sexiest man alive" by Amy and Ben. Fans also agree, noting that John is "the hottest member of Evanescence — past or present — that isn't Amy."

His immediate family includes wife Shelly, daughter Bethanie, and a new son named John Charles LeCompt II (J.C.). He also has a brother, Jimmy LeCompt, whom he collaborated with in a project called Burnt Offerings. The song they are known for doing together is called Free But Hollow. Jimmy has been known to make apperances on the message boards in the past.

His first commercial effort was a band called Mindrage. Pulling double duty as lead vocalist and lead guitarist, he enlisted Nick Williams (bass) and Chad Wilburn (drums) to form the Christian Metal trio. In June of 1998, Mindrage recorded the album Sown In Weakness, Raised In Power - a full album consisting of 11 tracks. For their second album, (a collaboration with the band Nailed Promise) Justin Carder (now with Hap Hazard and Chasing The Fall) took over on drums, replacing Chad Wilburn for the four track feature.

Later, John joined forces with then-Living Sacrifice guitarist Rocky Gray to form what would be known as Kill System, along with Chad Moore (Soul Embraced) on bass, Allen Robson (Between the Second, Becoming Saints) and former Living Sacrifice drummer Lance Garvin on drums. Unfortunately, the Kill System project never had an official distribution deal despite their commendable effort. Despite John's heavier musical history, Kill System proved to be much more melodic, making the project a big fan favorite.

Continuing with their seemingly endless collaborations, John joined Rocky once again for work with Soul Embraced. John features as a vocalist on the track entitled, "Seems Like Forever" on the 2003 album Immune.

During Evanescence's creative hiatus, John (on guitar / background vocals) formulated what would later be known as Mourningside. Members include Jack Wiese (ex-lead of the.5th.element) providing lead vocals, fellow Evanescence member Rocky Gray on drums, Jeff Bowie (Becoming Saints) on bass and Devin Castle (Eva Braun / Ashes of Augustine) on guitar. They have since played shows in St. Louis, Missouri, as well as in Little Rock, Arkansas, gaining not only a strong fanbase in the States, but among Evanescence fans all around the world.

Like Kill System, Mourningside has yet to gain an official distribution deal but has released a collective 7 track EP. Their debut song, "Painting The Eyes," was featured on a multi-band promotional CD distributed at Dirty Elf Fest 2005 in St. Louis, Missouri.

In 2005, John began collaborating with ex-Future Leaders of the World lead Phil Tayler. They are currently working on new material and plan on touring with hopes of releasing an album in late 2006. As a band, Machina includes Phil Tayler (vocals), John LeCompt (guitars), Jack Wiese (guitars), Thad Ables (bass) and Rocky Gray (drums). With new material and new members, the band decided to change their title from "Future Leaders Of the World" to "Machina" in Spring / Summer 2006.

Contrary to popular belief, this particular "Machina" is pronounced "mah-shee-nah" and not "mah-kee-nah" as generally spoken.

We Are The Fallen

In 2009 it was announced John LeCompt would be joining ex-Evanescence members Ben Moody and Rocky Gray along with former American Idol contestant Carly Smithson (Vocals) and bass player Marty O'Brien to form We Are The Fallen. The group are expected to release their debut album sometime in 2010.

As for amplification, he has stated he a uses Mesa Stilletto Deuce. [1]

Set mahogany neck with 24-3/4" scale, topped with a rosewood fretboard adorned with abalone flags plus the model name at the 12th fret. TonePros locking bridge and tailpiece keep tuning rock-solid. The black and cherry models feature a pair of EMG-81 pickups, while the amber sunburst model (the particular model used by John) sports a Seymour Duncan JB/59 setup.

In an interview John answered:

"The only effects that I use are some delay and reverb... sometimes a little tremolo and wah. I only use it on my clean channel. My metal channel is all metal, all the time. No stinking effects there."

John was officially "fired" from Evanescence on May 4th, 2007 for unknown reasons. In an excerpt from a blog/EvBoard Post, he writes about the decision:

"...Around 3:30 pm yesterday I recieved a call on my cell from Amy. This call wasn't from a friend who appreciated me but from an enemy who was prepared to hurt me and my family. Without any warning or negotiotiations for my future, I was fired for no good reason. We have not always seen eye to eye on everything, but who does? Our common goal was always the same. To make Evanescence the best rock band it could ever be. I have always given blood, sweat and tears to make that happen but apparently that is not enough. I have now become just another of the people fallen by the wayside on the revolving door of her life. It's funny how many of us there are now...

"...Thank you all for the good years and being the most incredible fans and friends. Maybe I will see you again..."[1] [2]

He continues in another blog entry in reference to the previous statements:

"Just to let you know, I pulled down the very personal blog about my departure from Evanescence. I felt that I said what I had to say and the response was very much the same among everyone who read it. I feel beyond those very strong feelings now and am ready to move past them. Now I am all about Machina and persuing that without bitterness or hurt in my heart. EV was what it was, a stepping stone. A very large stepping stone that I truly appreciate and will always hold close to my heart. I will never play down the importance of it in my life or the lives of my friends and family. It is a piece of history that I got to be involved in and will remember forever. I choose to remember the good things about it rather than a negative perspective of a disgruntled former member. So, all that is said...let's move on and rock out with our cock out to MACHINA!!! Ready, Set....GO!!!"[3]