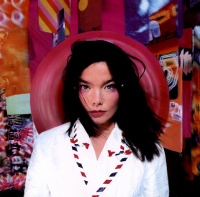 Björk is a singer/songwriter who grew up and was born in Iceland. Her musical career began in 1977 when Björk was 12 and a radio station helped her create an album of covers of popular songs. She then collaborated in many bands such as Tappi Tikarrass, KUKL, The Elgar Sisters and The Sugarcubes. The Sugarcubes was the band that springboarded her career into the international scene, but after their third studio album, the group disintegrated:

"Sugarcubes, number one was people. We liked each other and we had a good time together and the music that came out of that relationship was a bit of an accident. When I realized the Sugarcubes had become this serious band-thing, I started to realize that it was now or never. If I didn't record all those songs I'd written in my head, then it would never do it."

"You shouldn't milk out a joke for too long."

After a few other colaborations, Björk finally released her first official solo album of new material titled Debut. The album, rich with playful beats and unique melodies, quickly went Platinum in the U.S.

Her presence in the pop scene continued with subsequent releases Post, a more electronically inspired album with classic elements, then Homogenic, which experimented further with her unique sound and spawned the song 'All Is Full of Love' (the video of which, drected by Chris Cunningham, won countless awards for it's advances in video technology) and one of Amy's favorite Björk songs: 'Jòga.'

Vespertine came next where Björk played with tiny beats and sounds, while still always keeping classical strings a vital part of her repitoire. It was within the era of Vespertine where the famous Swan Dress appeared, which raised eyebrows at the 2001 Academy Awards.

Her most recent studio album, Volta, is awaiting release in April and will be accompanied by her first worldwide tour in 4 years.

"She's my idol," Lee gushed. "It was the only time I was awestruck. I was so shocked to meet her I could hardly speak, which is embarrassing."

"Because I believe we're all equal and fame doesn't mean much and that we're all just people. But with Björk, it was so hard for me."

"I've always been that 'dumb fan' with her. Her art has inspired me so much. I wanted to understand all her lyrics because they were so intimate. It was like she was offering a piece of herself she would never be able to if not through her art."

"When people approach me freaking out — shaking and crying — I just tell them I'm no different. I want to tell them that I'm nothing special. But I also don't want to ruin their moment.

"But there I was, pulling the same crap on Bjork," Lee said, letting out a big sigh. "I felt like such a stupid fan. 'I can't stick around for champagne, Björk, I have to go off and cry.' And I did. I held it together and then I went off and cried. I had just seen her perform for the first time." (Source)