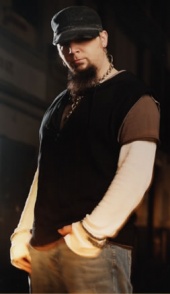 Ben Moody (born January 22, 1981, in Little Rock, Arkansas as Ben Robert Moody III) was formerly the lead guitarist for Evanescence from 1996 to 2003. It all started when he saw Amy playing Meatloaf's I Would Do Anything For Love at a Christian youth summer camp. The two became friends, and the rest is rock music history. Wrote many of the most popular Evanescence songs including My Immortal. His father is a prominent photographer in the Little Rock area.

Ben left the band in October 22th, 2003[1], before a Berlin concert, after creative differences caused a rift between he and Amy. The two are reported to have been in a relationship sometime in the past, and this relationship is actually what inspired most of the songs in Evanescence's pre-2003 repertoire (see Going Under). In the past, Amy would only say that the songs were about an "abusive relationship" with an un-named person.

He has worked or is working on many different projects post-Evanescence. The End Has Come on the Punisher Soundtrack, Nobody’s Home on Avril Lavigne’s Under My Skin, Kelly Clarkson’s Breakaway (with David Hodges), the Blank Theory’s next album (supposedly with Dave Fortman), and a project with David Hodges that had been rumored to be on the new Passion of the Christ soundtrack featuring Wind-up artists called Only Human, Only God, but had never been released. He plans to release an album on Wind-up Records, and the release date was March 27, 2007—it has however been postponed indeffinitely. The album has to date been known as Can't Regret What You Can't Remember. As of 2007, Moody has begun working with Céline Dion on her upcoming album.

Ben has caught a bad rap from the fans since his departure. In an interview with MTV, he explained his reasons for leaving the band: