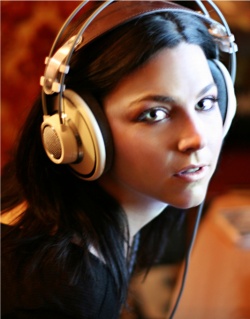 Amy Lynn Hartzler (née Lee, born December 13, 1981 in Riverside, California) is the co-founder and lead singer of Evanescence. Her family moved to West Palm Beach, Florida, Rockford, Illinois, and finally stopped in Little Rock, Arkansas. Responsible for many of Evanescence’s hard hitting lyrics and is the main songwriter on the new album, The Open Door. Amy provides the image for the band and does most of the interviews. Ben Moody discovered Amy Lee’s voice in summer camp in 1994 when she performed a few lines of Meatloaf’s "I'd Do Anything For Love." After that, the rest is history. She is currently one of the most popular and sought after voices in music today.

Lee has no trademark style with the "Faux Gothic". She dyes her hair jet black, though her hair is actually light brown. Her eyes are naturally light green, although she wears light blue contacts which make her eyes look ice blue. She also designs many of her own clothes, including those worn in the music video for Going Under and the dress she wore at the 2004 Grammy awards. After she designed it, she chose Japanese designer H. Naoto to make it for her,[1] although she does sometimes make her own clothes. In concerts, she often wears a corset and fishnets. Amy used to have a notable piercing on her left eyebrow which she had taken out and had re-pierced a few times, but she took it out for good sometime in mid-2005.

Amy Lee will be honored with National Music Publishers' Association Songwriter Icon Award for 2008. She will recieve the award on June 18 in New York City. This award is very privileged as only one person gets it per year out of the whole music industry. She will also perform for them. The Icon Award recognizes outstanding songwriters for personal achievement and who personify the vision of NMPA and the goals of its members. Former recipients include Jimmy Webb and Neil Sedaka. To see the official page, click here:[1]

Amy Lee attended the Betsey Johnson Spring 2009 Fashion Show. The event was not in 2009 (of course). It was held in 2008. She was there with Kelly Osbourne.

Lee, the principal lyricist and composer of Evanescence, employs simple yet expressive melodies that stand alone or intertwine with accompanying guitars. Many melodies involve a sub melody or return to a base note or sequence, as in the choruses of "Good Enough," "Breathe No More," and the live Korn cover "Thoughtless" as well as the intro and bridge of "Imaginary," among others. Many of the piano parts are comprised of melodies with minimal chords and left-hand accompaniment, both when played with guitar parts ("Lithium," "Like You," "Your Star," "Going Under," "Thoughtless," among others) and alone or featured with minimal backing ("Lithium," "Lose Control," "The Only One," "Good Enough," "Bring Me To Life," "Imaginary," "Taking Over Me," "Hello," "Breathe No More," "Thoughtless," among others).

It is also quite noticeable that most Evanescence songs such as Bring Me To Life, Tourniquet, Imaginary, Haunted and the Sound Asleep version of Understanding have almost similar chord progressions.

In 2005, Amy became a spokesperson for the Epilepsy Foundation and launched a campaign called Out of the Shadows. The goal is to help spread awareness about epilepsy and to encourage people to not discriminate against people with epilepsy. This campaign is important to Amy, as well as her family, because her younger brother has epilepsy and she has seen first hand the effect it has. Here is the official website of the project.

Amy is currently supporting To Write Love on Her Arms, a non-profit movement dedicated to presenting hope and finding help for people struggling with depression, addiction, self-injury and suicide. Her husband, Josh Hartzler, has a counseling background. Amy was wearing a T-shirt of the movement on 11/12/2007, in Nissan Live on Yahoo! Music. Here is the official website of the project.

On January 22nd, 2010, Amy announced on her Twitter account[3] the release of Together Again to the public, after the Haiti earthquake events - "Today @Evanescence is releasing a new song, Together Again, and the proceeds are going to help Haiti! Details to follow!". If you were to donate at least five dollars or more, you would receive this song. According to Amy, the song successfully raised over $31,000 in its first week of availability [4].

In 2010, Amy supported Restore Freedom to help the campaign against sex trafficking and for the construction of the first "safehouse" in NY, to host the victims of sex trafficking. in the Restore Freedom official website, Amy has a personal page where it's still possible making a donationto support the project. The campaign raised over 125,000$[5].

She appears on KoЯn's 2007 MTV Unplugged album on the track 'Freak On A Leash'. The song was also released as the first single.

Amy Lee made a remake of Sally's Song of the Nightmare before Christmas (1993). The cover is featured on the Nightmare Revisited soundtrack which was released in September 2008 in the U.S and 27th October in the U.K., published by Walt Disney Records.

On tour, Amy uses a Baldwin baby grand piano with a keyboard insert (a baby grand piano shell with an electronic keyboard instead of an acoustic piano on the inside). She also uses a stand-alone Baldwin keyboard and Shure Microphones. But during their NYC Secret Concert and during the Maquinaria Festival in Brazil in 2009, she used a Roland Keyboard.

Amy Lee does not have a personal MySpace page or Facebook profile. There are several impostor pages on both sites claiming to be Amy Lee. They are not real. [6]

Amy has a Twitter account, created September 22, 2009, with the nickname of AmyLeeEV''[8]. With this profile Amy keeps fans updated about news. She revealed this writing this post on EvThreads: