Difference between revisions of "After Midnight" 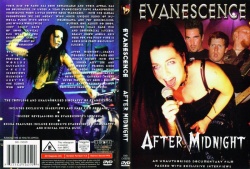 Unauthorized DVD released in the fall of 2004 by Chrome Dreams. The DVD features interviews with past band members, band friends, Little Rock personalities and Amy Lee’s dad. It also has a few clips from the MTV Video Music Awards 2003 and Red Carpet of the 2004 Grammys. The film contains no music or performances by Evanescence.